Though grand by city standards even when the Peters first purchased it in 1805, the original eight and a half acres of Tudor Place was by no means their largest property. Most affluent urban families of the time owned large farms, and the Peters were no exception. Among the lands Thomas Peter inherited from his father Robert was a tract in Montgomery County that the family called Oakland, part of a coveted royal land grant once known as Conclusion. On it they husbanded not just Peter’s cherished race horses, but also crops, lumber, cows and hogs, some of which were transported to Tudor Place every fall for smoking. Enslaved workers also moved between the two locations, family reminiscences and other records indicate.

To at least two generations of Peters, Oakland represented more than a business or country larder. In this essay, archivist Wendy Kail traces the property’s legacy in law, commerce, and family memory.

« Return to Topics, “Georgetown & the Federal City” or “Land & Business”
« Return to Blog 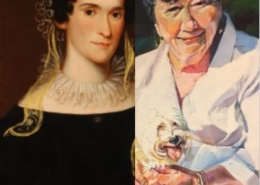