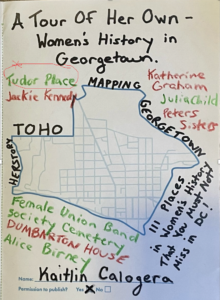 Hot off the presses — Congratulations to our very own Tour Of Her Own (TOHO) tour guides on publishing “111 Places in Women’s History in Washington, D.C.”!

Check out this Museums 101 video to see how Tudor Place found primary sources for a popular story that is part of the historic house  tour.

Then: Explore historic newspapers from your home state on Chronicling America

Celebration came to these historic gardens this month when Tudor Place Trustees and staff gathered with neighbors and other supporters to “cut the ribbon” on the newly restored Box Knot Garden. This formal layout of heirloom roses in geometric beds defined by boxwood hedges dates to the home’s earliest days. Its renewal and restoration for centuries to come, completed in November 2011, signals the commitment to the preservation of the entirety of historic assets stewarded by Tudor Place Foundation for the public good.

The North Garden donned its best spring colors for the evening reception, which featured wine, canapes, and heartfelt remarks on the historic estate’s past, present, and bright future. Once the ribbon was released, guests trod lightly among the flower beds where Tudor Place founder Martha Custis Peter herself once tended beloved roses. During the Civil War, the garden fell into disrepair and its original layout was lost. It was recovered in the 1926 from a garden design book showing Avenel, in Virginia, where the Knot had been copied, and a restoration was completed in 1933 based on the Avenel drawing.