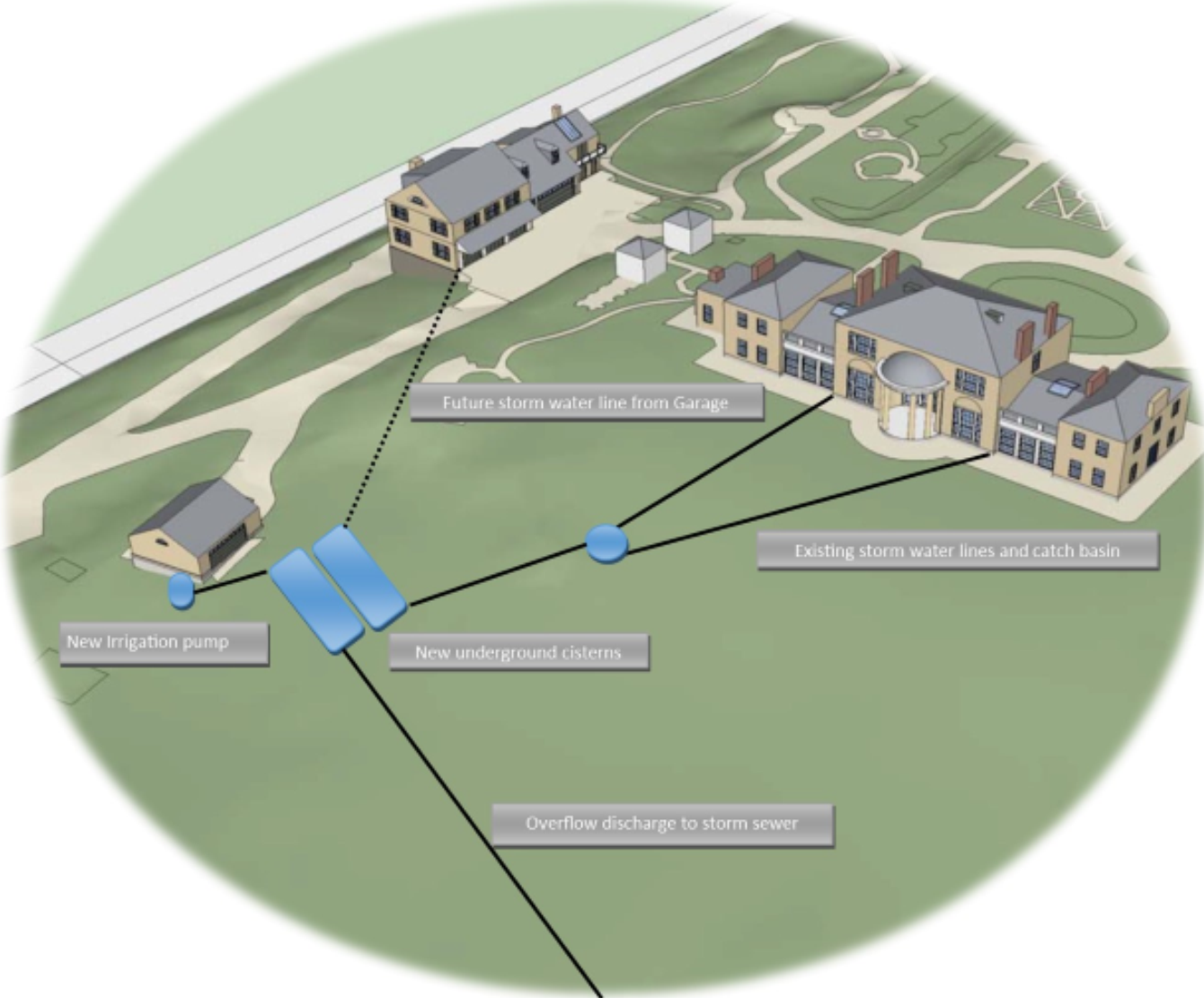 Tudor Place, in pursuing sustainability and responsible stewardship of the historic house and grounds, is currently working to actively conserve water and regulate the stormwater flow on and from our site.

The stormwater management project, starting in February 2019 on the South Lawn, will reduce silt and water runoff, mitigate destructive erosion, and diminish our consumption of fresh water.

In collaboration with our architect, civil engineer, preservation consultant, and other experts, we designed a system that will meet our needs and our sustainable practice standards. Two underground cisterns will be fed by existing stormwater lines that gather rainwater from the Main House downspouts and gutters. These two cisterns can hold nearly 20,000 gallons of water, which we will use for irrigation after a short treatment process. Altogether, this project will involve excavating and placing the cisterns, installing the irrigation pump and water treatment system, and connecting the irrigation lines to the new water supply.

This project is a component of our Master Preservation Plan, developed in collaboration with stakeholders to reach the goal of enhancing Tudor Place’s interpretive capabilities while advancing the site’s overall sustainability. Other sustainability initiatives include implementing LED lighting throughout the property, and building an HVAC system based on geothermal energy.

With 8½ (now 5½) acres of land that once supported hay crops and livestock, early generations of Peters fed their large household with a mix of home-grown provisions and foods secured from nearby merchants and outlying farms, including their own.

Because pork was not merely favored in the early 19th century but a staple, the Smokehouse stood at the center of a food chain supported by Oakland, the Peter family’s plantation in rural Seneca, Maryland, some 20 miles away. (Georgetown, until the late 1700s, was part of Maryland.)

Hogs raised at Oakland were delivered each fall to Tudor Place to be slowly cured over weeks by an enslaved servant.  As Martha Peter’s daughter Britannia recalled, “The hogs were cut up, salted and packed in barrels for six weeks, after which they were hung up with white oak splits in the meat house and smoked.”

The Smokehouse was integral in both processing the meat and, in the months that followed, storing it securely from animals, thieves, and vermin.

New research shows that the building likely stood here as early as 10 years before Martha and Thomas Peter purchased the property in 1805 from Francis Lowndes, formerly of Bladensburg, Maryland. This would make it one of the only surviving 18th-century outbuildings (or “dependencies”) in the District.

The researchers used dendrochronology, a method of dating wood by its inherent patterns of tree (or “growth”) rings. Samples of Smokehouse lumber were compared to databases of the region’s trees from various eras to arrive at a construction date of 1795. To corroborate the results, we know only that the property contained two dwellings and five other structures of unnamed type when Lowndes sold it to the Peters. We will continue to seek descriptions of what those buildings consisted of, to help us confirm the dendro results, so expect more news in the future about this exciting find.