Week two of excavations in and around the north garden “Tennis Lawn” at Tudor Place continues to produce remarkable archaeological findings. Last week, contractor Dovetail Cultural Resources uncovered what appeared to be the edge of a builder’s trench in one of the Orchard “units” (spade-dug pits). To follow up, Dovetail opened a second, adjacent unit to try to determine the trench’s size and extent.

What they discovered was not, in the end, a trench. At the level where they expected to find back-filled dirt in a narrow channel built to hold a foundation wall, the archaeologists instead found mounds of debris indicative of a domestic feature: Rather than a trench, they were digging in the feature itself, and coming across good-sized fragments of bone, ceramic sherds, buttons, a piece of pipe bowl, nails, and oyster shells, among other materials.

The type and distribution of artifacts accords with what is typically associated with domestic dwellings inhabited by servants, and specifically enslaved servants. Equally exciting, from a reseearch perspective, are the nature of some of the ceramic sherds. These rough, hand-made pottery pieces suggest the type of vessels known to have been made by enslaved African Americans and primarily found in the Chesapeake and Carolina low-country regions. For Tudor Place, this remarkable discovery will be a huge step toward understanding and interpreting the lives of enslaved workers on this property and in nearby urban settings.

While this phase of archaeological investigation is coming to a close, we will continue to learn more about the project findings as the Dovetail team dates and analyzes the artifacts and their distribution pattern.  Stay tuned to the blog for more details in the months to come!

There was excitement in the air Monday morning, despite the chilling wind, as the staff of Dovetail Cultural Resource Group arrived at Tudor Place to being a much anticipated Phase II archaeological project aimed at uncovering information about servant life at Tudor Place. Dovetail completed a comprehensive Phase I archaeological survey of the property in 2011. It entailed digging carefully mapped test pits at close intervals around the 5.5-acre property — exploratory archaeological work that uncovered fascinating fragments of domestic life, including ceramics, personal items such as buttons, and architectural debris.

These tantalizing hints from the Phase I study confirmed that the Tudor Place grounds are rich in archaeological resources and offered several intriguing possibilities for further study. Test pits in and west of the Tennis Lawn, to the house’s northeast, yielded a high concentration of domestic artifacts in a relatively small area, suggesting a possible connection to servant life at Tudor Place. This evidence of consistent activity over time, along with an 1863 map suggesting the location of an outbuilding in this area, prompted its selection for further study as part of the Phase II investigation, generously supported by The Marpat Foundation.

Results came quickly: By 11:00 a.m. Monday, less than two hours after the dig started, several exciting ceramic fragments had turned up in the upper layers of the Tennis Lawn test pit. Among them was a lovely fragment of Rockingham ware, a type of refined earthenware produced in North American ca.1830-1930 and distinguished by the presence of a brownish glaze with a dripped or mottled effect over a yellow base.

Archaeologists dig test pits in layers, with the color of the soil or a change in texture and composition signifying the end of one layer and start of the next. In this way, artifacts can be understood in the context of the property’s history according to where they fall in the stratigraphy of the pit.

Throughout the week (when it isn’t snowing!) the archaeology team will continue digging up to seven test pits in hopes of uncovering more information about domestic life at Tudor Place, and particularly the lives of free and enslaved servants.

If you are interested in archaeology, or just curious to see how a dig operates, what a great time to visit Tudor Place and observe this exciting work in progress!

Stepping into George Washington’s shoes, Girl Scouts, Boy Scouts and other young people experienced life without apps, engines and appliances on Presidents’ Day. They joined more than 100 visitors of all ages in “Celebrating George” and his influence at Tudor Place, along with the chance to see Washington items of special significance on view just this one day each year. (The wider “Window on Washington”  featuring displays of many Washington artifacts remains on view through March.) 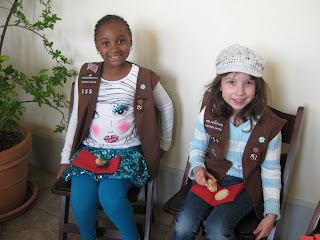 The event provided a rare occasion to snack on period treats, try one’s hand at early American artwork, and stroll freely through the mansion with expert staff and docents on hand to highlight the Washingtons’ legacy here. During Presidents’ Day only, visitors could examine one of three surviving letters from George Washington to his wife, in which he bade her a fond farewell as he took up his Continental Army commission. Mrs. Washington’s handcrafted needlework was also on display for one day only, as was a famed miniature portrait of the first President, an engagement gift from him to his step-granddaughter, Martha Custis Peter — founding mistress of Tudor Place. — and one of the few portraits for which he personally sat.
Guests were met in the Conservatory with colorful baked goods made from period recipes, including Codling Apple Tarts, Hyson’s Green Tea, and Martha Washington’s own Great Cake (recipe follows this post). 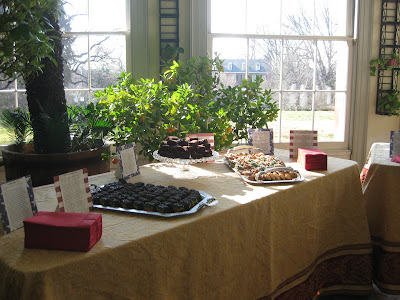 Every child was invited to complete a scavenger hunt through the grounds, and its completion earned them small prizes. Our camera followed one set of scouts and families who, clipboards in hand, headed off after treats were finished for a little adventure. 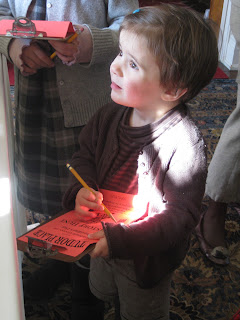 Natural sunlight beaming through the windows lighted their way throughout the house as they searched for clues. First, they were introduced to appliances that residents used before the conveniences of electricity.  They considered the absence of microwaves and freezers in the Peter family’s 1914 kitchen. 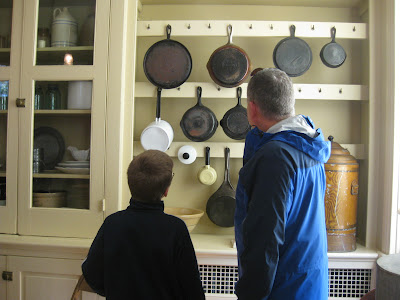 Scavenger hunters learned how, even in the absence of motorized tools, domestic workers pulled off elaborate dinners for the estate’s constant stream of guests and residents. In the absence of modern appliances, they recognized pots and pans and stoves, considering the different ways they were used before electricity changed household routines.
Moving into other areas of the house, boys and girls alike were fascinated with the network of bells and wires throughout the house that used to summon servants.  As they explored the house, they searched for the cords in each room. 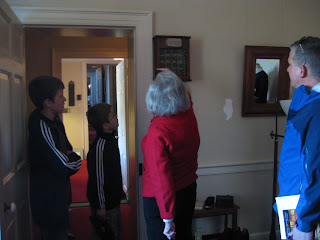 Traversing a gravel path through the North Garden, they next visited the Dower Townhouse, our administration building, for hands-on learning about the art of silhouette-making, a popular medium for early American portraits. Inspired by the images of America and Columbia Peter that flank the main house Drawing Room, and using a three-dimensional bust of our first President, Artist-in-Residence Peter Waddell demonstrated how to first sketch a profile. 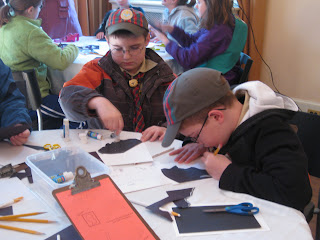 Students drew and discussed the visual angles in various works of art before drawing profiles of George Washington, which they then cut out and placed on elegant white backgrounds. To further adorn their images, Peter taught them about differences in fonts, uses of capital letters, and the origin of serif lettering. 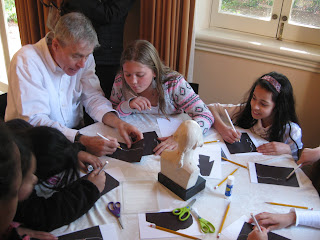 Crossing back through the garden, the Pierce-Arrow Garage came next, where guests learned from “Martha Washington” herself how to have still more fun without electricity.  She began with a lesson in dancing, explaining that Georgian-era style valued balance and symmetry. 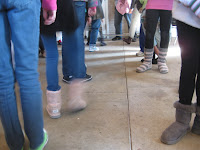 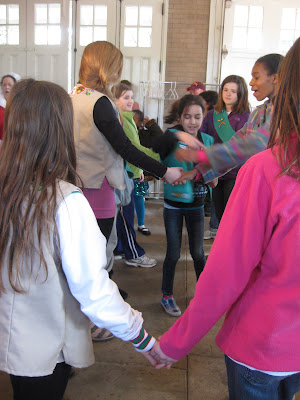 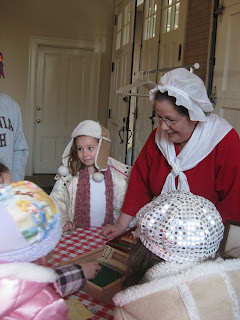 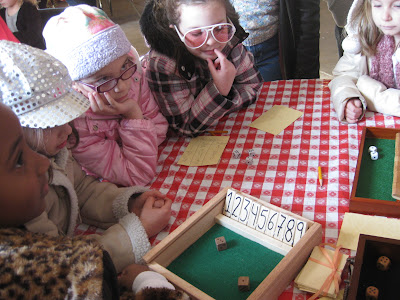 Much of what children and families learned on Presidents’ Day encourages a commitment to sustainability. The Girl Scouts will use their new understanding on March 31, when they participate in Earth Hour, a World Wildlife Fund initiative that creates awareness about climate change by asking participants to turn off the lights an hour. Families can also connect with nature and sustainability, in one of the city’s greenest spots during the popular annual Earth Day at Tudor Place, Sunday, April 22. From 1 to 3 p.m., enjoy games, a themed scavenger hunt, and planting seeds from the historic garden in pots you decorate yourself.
Tudor Place offers additional  events for visitors of all ages throughout the year, including educational programs for scouts, school groups, and homeschoolers. Visit us soon!
For still more photos from Presidents’ Day, and to add your comments on the day, see the Facebook album. Good luck with the recipe below, and let us know how it turns out!

original
Take 40 eggs and divide the whites from the yolks and beat them to a froth. Then work 4 pounds of butter to a cream and put the whites of eggs to it a Spoon full at a time till it is well work’d. Then put 4 pounds of sugar finely powdered to it in the same manner then put in the Yolks of eggs and 5 pounds of flour and 5 pounds of fruit. 2 hours will bake it. Add to it half an ounce of mace and nutmeg half a pint of wine and some fresh brandy.

modern adaptationsIn making Martha Washington’s famed cake, Mount Vernon’s curatorial staff followed Mrs. Washington’s recipe almost exactly. Where the recipe called for 5 pounds of fruit, without specifying which ones, 2 pounds of raisins, 1 pound of currants, and 2 pounds of apples were used. The wine used was cream sherry. Since no one pan would hold so much batter, it was divided into two 14-inch layers, which were then stacked. (The cake in its original form would have been a single tall layer). These layers were baked in a 350-degree oven for 1.5 hours and iced with a very stiff egg-white-based icing flavored with rosewater or orange-flower water. 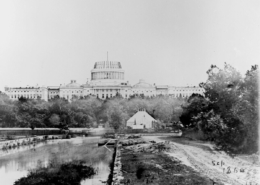