Led by the voices of Britannia Wellington Peter Kennon, the second owner of Tudor Place; and her great-grandson, Armistead Peter 3rd, take a leisurely stroll through this National Historic Landmark.

Peter family guests would enter the house through the double doors of the north entry and encounter soaring 15-foot-tall ceilings in the Vestibule. Passing through the Vestibule into the Saloon, guests could gaze through Thornton’s floor-to-ceiling windows at a vista that included the port of Georgetown. On either side of the Saloon sit the Parlor and Drawing Room. Peek inside the rooms shown below and learn interesting tidbits of history.  Click for videos.

In 1805 Thomas and Martha Parke Custis Peter purchased Tudor Place. The Peters then asked their friend, the self-taught architect Dr. William Thornton (1759-1828), to design a home for the property.

A typical Federal-period home, the floor plan reflects a pronounced public-private divide.  For example, Peter family guests would enter the house through the double doors of the north entry into the Vestibule. Within the Vestibule, double doors to the left open to the main staircase and bedrooms above, while matching doors to the right lead to the service wing of the house. Few guests would ever have seen these utilitarian and private spaces.

In the early American republic, the founding generation consciously chose to associate the nation with the ancient democracies of Greece and the republican values of Rome. Using Roman architectural vocabulary, the Federal style applied to the balanced and symmetrical version of Georgian architecture that had been practiced in the American colonies’ new motifs of neoclassical architecture, which was epitomized in Britain by Robert Adam, who published his designs in 1792.

Today the rooms appear as they did during the period of the last owners, Armistead Peter 3rd and his wife, Caroline, who displayed new furnishings alongside the inherited objects of six generations who lived here from 1805-1983.

The house’s five-part structure, with a two-story Central Block and low Hyphens connecting to higher, two-story wings, followed a form immensely popular in the Chesapeake region during the Federal period (c. 1780 and 1830, and particularly from 1785 to 1815).

The most architecturally significant feature is the domed, marble-floored Temple Portico. Thornton’s circular structure extends into the house itself, with curved, wall-to-floor ceiling windows serving as a transition between interior spaces and the exterior sprawling South Lawn. The exterior of the brick house was clad in stucco, scored to resemble blocks of finished stone, a common Federal period technique. 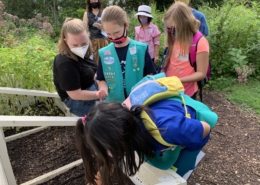