Week two of excavations in and around the north garden “Tennis Lawn” at Tudor Place continues to produce remarkable archaeological findings. Last week, contractor Dovetail Cultural Resources uncovered what appeared to be the edge of a builder’s trench in one of the Orchard “units” (spade-dug pits). To follow up, Dovetail opened a second, adjacent unit to try to determine the trench’s size and extent.

What they discovered was not, in the end, a trench. At the level where they expected to find back-filled dirt in a narrow channel built to hold a foundation wall, the archaeologists instead found mounds of debris indicative of a domestic feature: Rather than a trench, they were digging in the feature itself, and coming across good-sized fragments of bone, ceramic sherds, buttons, a piece of pipe bowl, nails, and oyster shells, among other materials.

The type and distribution of artifacts accords with what is typically associated with domestic dwellings inhabited by servants, and specifically enslaved servants. Equally exciting, from a reseearch perspective, are the nature of some of the ceramic sherds. These rough, hand-made pottery pieces suggest the type of vessels known to have been made by enslaved African Americans and primarily found in the Chesapeake and Carolina low-country regions. For Tudor Place, this remarkable discovery will be a huge step toward understanding and interpreting the lives of enslaved workers on this property and in nearby urban settings.

While this phase of archaeological investigation is coming to a close, we will continue to learn more about the project findings as the Dovetail team dates and analyzes the artifacts and their distribution pattern.  Stay tuned to the blog for more details in the months to come!

There was excitement in the air Monday morning, despite the chilling wind, as the staff of Dovetail Cultural Resource Group arrived at Tudor Place to being a much anticipated Phase II archaeological project aimed at uncovering information about servant life at Tudor Place. Dovetail completed a comprehensive Phase I archaeological survey of the property in 2011. It entailed digging carefully mapped test pits at close intervals around the 5.5-acre property — exploratory archaeological work that uncovered fascinating fragments of domestic life, including ceramics, personal items such as buttons, and architectural debris.

These tantalizing hints from the Phase I study confirmed that the Tudor Place grounds are rich in archaeological resources and offered several intriguing possibilities for further study. Test pits in and west of the Tennis Lawn, to the house’s northeast, yielded a high concentration of domestic artifacts in a relatively small area, suggesting a possible connection to servant life at Tudor Place. This evidence of consistent activity over time, along with an 1863 map suggesting the location of an outbuilding in this area, prompted its selection for further study as part of the Phase II investigation, generously supported by The Marpat Foundation.

Results came quickly: By 11:00 a.m. Monday, less than two hours after the dig started, several exciting ceramic fragments had turned up in the upper layers of the Tennis Lawn test pit. Among them was a lovely fragment of Rockingham ware, a type of refined earthenware produced in North American ca.1830-1930 and distinguished by the presence of a brownish glaze with a dripped or mottled effect over a yellow base.

Archaeologists dig test pits in layers, with the color of the soil or a change in texture and composition signifying the end of one layer and start of the next. In this way, artifacts can be understood in the context of the property’s history according to where they fall in the stratigraphy of the pit.

Throughout the week (when it isn’t snowing!) the archaeology team will continue digging up to seven test pits in hopes of uncovering more information about domestic life at Tudor Place, and particularly the lives of free and enslaved servants.

If you are interested in archaeology, or just curious to see how a dig operates, what a great time to visit Tudor Place and observe this exciting work in progress!

Nearly 100 guests meandered through our gardens this past balmy Thursday evening for “Hard Cider & the Harvest.”  The twilight romp was the latest in our Tudor Nights series for members and guests.  In the Administration Building, an 1867 Victorian house, guests snacked on tasty small bites including exotic dips, pates, pumpkin truffles, and fanciful “s’mores on sticks.” And of course, there was spiced and spiked cider!  Strolling through the garden to the main house, the focus was on a 20th century object in the collection, a beautiful vase from the world-renowned Rookwood Pottery of Cincinnati.

There’s always something to talk about at Tudor Nights, because the surroundings themselves are part of the conversation.

A few hundred feet away, along the gravel walkway lined with tealights and redolent of boxwood, the main house and its historic offerings beckoned.

Inside, talk was informal yet informative, as Executive Director Leslie Buhler and Curator Erin Kuykendall chatted with guests and presented the evening’s “star,” a 1904 Rookwood Pottery vase, in the Saloon — the central foyer, with views of the South Lawn through the famed Temple Portico. 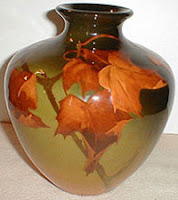 You can see from the golden tones of the naturalistic maple leaves why this baluster-shaped vase was perfect for an autumn event. And its craftsmanship offers a glimpse into an important element of the American Arts and Crafts Movement of the late nineteenth and early twentieth centuries. Founded in 1880 by Maria Longworth Nichols, The Rookwood Pottery Company was the country’s first female-owned pottery manufactory. Nichols hired gifted potters, decorators, and technicians, experimented with glazing techniques, and set high standards of quality. These assets led Rookwood to garner some of the first juried awards in Europe granted to American-made ceramics. The pottery closed in 1967, but has recently been revived under new ownership.

Vases such as this one are typically stamped with Rookwood’s insignia (a reverse R adjoining a P, shown at right), a Roman numeral for the date of creation, and the decorator’s mark incised below. For more information on Rookwood ceramics, see Jeffrey B. Snyder’s Rookwood Pottery (Schiffer, 2005) or Anita J. Elli’s Rookwood Pottery: The Glaze Line (Schiffer, 1995).


Hard Cider and the Harvest was a great way to usher summer out and welcome the brisker, festive seasons to come. We thank all who attended, and we enjoyed their company. (More photos can be viewed in our Facebook album.) To join us for another romantic and convivial evening, sign up now for the last Tudor Nights of 2011, “Punch Royal and Holiday Trimmings,” on December 2. 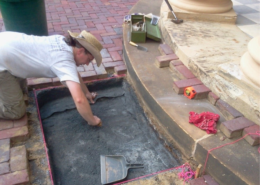