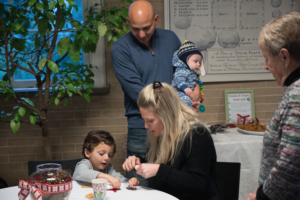 From the District Fray Magazine: The holiday season is here and there’s plenty of family friendly fun to be had throughout the DMV area. We’re here with a list of winter festivals, firework displays and educational events to help your whole family get into the holiday spirit throughout the D.C. area this December.

Watch holiday video with Executive Director Mark Hudson, who sends a heartfelt thank you to all our visitors, donors, members, friends and neighbors and appreciates your support. Together we keep history alive. Join us and preserve this National Historic Landmark for future generations. Click to donate

Don’t leave your front door empty this Christmas season! Join us at Tudor Place for a wreath making workshop with all the trimmings. Craft your wreath from historic Tudor Place garden materials including holly, cedar, and magnolia leaves to create that perfect wintery touch for any holiday celebration. Leave your wreath green or add bows, bells, and berries to capture the Christmas spirit.

Note:  Capacity is limited and pre-registration is required. This is an in-person program. Please review the Tudor Place Health and Safety Guidelines before registering and attending.

Those age-old Christmas “traditions” we revel in – how traditional are they really? Whether we celebrate the holiday or not, most of us consider Santa Claus, Christmas trees, and paper-wrapped gifts almost timeless. But like the American melting pot itself, many holiday staples came from overseas and changed over time. See for yourself how customs change, during the festive installation, Red, Green & Gold, The New and the Old, running through December, as Tudor Place “Sparkles for Christmas” — on view during all regular tours and seasonal programs.

Throughout the 1816 mansion, compare nearly 200 years of celebrations with your own winter pastimes and family gatherings. And feast your eyes on sparkling décor that imagines how it would have looked if the home owners, the Peters, were decorating today. You will leave with much to think about and appreciate!

This creative installation melds 21st-century decorations and Peter family collections to celebrate the Washington-Custis lineage and contemporary flair. Few written descriptions or photographs show how or if the Peter family decorated, so our Collections team drew inspiration from the family’s interest in horticulture and nature. That’s why you’ll find lush greenery and more than 100 feet of lights alongside classic standbys like the circa-1910 goose-feather tree and fragile but playful pressed-paper ornaments made more than a century ago.

The weeks leading to December 24 appear to have been far quieter than our modern hail of festivities and engagements. As a student at Saint Albans School, Armistead Peter 3rd in 1914 described dinners, dances, and other family socializing at Tudor Place that commenced only on Christmas Day and ran through New Year’s. Still, the Peters lavished great attention and expense on their celebrations. Grocery invoices from 1926 in the archive show that they spent $322.88 – about $3,500 in 2013 dollars – on Christmas and New Year’s dinners alone.

In the 1920s office, you will find holiday greeting cards, also from the Archive. Though Christmas cards have been in circulation since the mid-1800s, they became a holiday ritual only in the early 1900s, supplanting the practice of giving small trinkets to friends. Another use for paper in the late 19th century was for small candy holders; vintage examples of these chromolithographs are also on view in the office.

In the Children’s Bedroom upstairs stands the goose-feather tree, imported from Germany. The tradition of live and faux indoor trees came from Europe in the 19th century, but mistletoe and holly sprigs were already popular here for decorating. Vendors began selling decorative greens in quantity at public markets in Washington in the 1870s and 1880s. You will see them in the house today and might want to pass with someone special under one of the mistletoe “kissing balls” that hang between the Saloon and adjacent reception rooms. In 1923, with the spread of electrification well underway (Tudor Place was wired in 1914), President Coolidge lit the first “national Christmas tree.”

Under their trees at home, children in the late 1800s might have found books, dolls, roller skates, sleds, baseball mitts or board games. Many such items are preserved in the Tudor Place toy collection, and you’ll find them beneath the feather tree. It was only in 1900 that paper gift wrap began to appear, usually in solid colors. (White tissue with red ribbon was most popular.) In the 1920s, however, printed patterns emerged – you can view examples from the 1950s in the Servant’s Sitting Room.

Felt stockings on the Parlor mantel today would have first appeared there after World War I and were probably purchased by the two last generations of Peters to live in the mansion, Armistead Peter 3rd, his wife Caroline Ogden-Jones Peter, and their daughter Anne. After opening presents on Christmas morning, the family would have retired to this room for a late breakfast and tea.

In the Servants’ Sitting Room, wrapping, polishing, and seasonal magazines.

Tudor Place domestic staff were most numerous from 1918 to 1923, the years surrounding the marriage of Armistead the 3rd and Caroline. Their number included African-Americans and immigrants from Ireland, Italy, England, and Russia, most of whom lived off-site. Well paid for the time, as demonstrated by Peter family records in the archive, they may have received bonuses at Christmas and other holidays. In the Servants’ Sitting Room, where gift wrapping is under way, the traditional Irish Christmas candle in the window welcomes those looking for shelter.

In the Kitchen, you can visualize the staff bustle as preparations are underway for a family feast. Recipes and receipts in the archive include a name familiar to modern D.C. shoppers: Bills from John H. Magruder Fine Groceries and other invoices show that the family’s 1926 Christmas turkey weighed 13½ pounds and was served with beef. Festive meals around 1920 were served à la Russe, with staff serving and clearing dishes one by one, a job that probably fell to butler Jacob Taube. After Taube’s departure, the Peters appear – like most of us – to have mostly served themselves.

Cakes and roasts have never fallen from fashion, but the Peter family table also bore dishes less common today. The plum pudding and figs on the Kitchen tables may be faux (made by Artist-in-Residence Peter Waddell), but the Chocolate Plum Pudding recipe on the baking table comes from a 1915 cookbook actually owned by the Peters, Knox Sparkling Granulated Gelatine Makes Desserts, Salads, Puddings, Sherbets, Jellies, Ice Creams, and Candies. The handwritten eggnog recipe likewise comes from the archive, and on the wooden table beside the door is another family recipe, typed in the early 1900s, for “Sweet Stuffing for Turkeys, Capons, or Chickens.”

In the kitchen, gelatin molds would have been in frequent holiday use.

Through December 2015, these holiday vignettes and the collections riches that surround them will be on view on all regular tours (docent-guided and offered hourly, Tuesdays through Sundays), as well as at Tudor Nights on December 4 and the festive Holidays Through History four-museum open house on December 6. Take a break from the season’s hubbub and rush to enjoy the panorama of holidays past, adding fun, elegance, and a taste of history to your own celebrations!

by Mandy Katz, Communications Officer
In the folio book on Tudor Place he published  in 1969, Armistead Peter 3rd dwells lovingly on many of the mansion’s objects and features. One of these is the Drawing Room mantel, “which must have been made here,” he writes, “as it is of exactly the same design as the simpler mantels up in the bedrooms.” The Drawing Room version, however, is graced by a special feature, one that called to mind the passage of time.
“I have always particularly liked the carving of Father Time with his broken scythe, sleeping, and giving the feeling that time stands still for those who live in this house,” wrote Armistead, the last of six generations of Custis-Peters who would live here. “It is a charming symbolism.

“As I stand before this figure of ‘sleeping time’ I think that I should recall some of the things that took place in this room during my lifetime,” he continued. “First of all were my Christmas parties with a splendid tree in the center of the north side of the room. My great-grandmother [Britannia] Kennon was always present, and there is a winged Victorian armchair in the garret on the flat arm of which may be seen the fine lines made by her fingernails as she tapped them quietly while watching the festivities…

“I am happy to say that we had many happy gatherings of our friends in these rooms throughout the years, over which my wife presided with the beauty of one of the little porcelain shepherdesses that might have come to life and slipped out of the cabinet for the occasion. I can still see her in the blue dress that I loved best, sitting on the end of the sofa, waiting for her guests to arrive.”
There are many opportunities in the coming month to picture these touching scenes for yourself while making your own holiday memories. Our regular, hourly docent tours show the house dressed for a gay 1920s Christmas that Armistead himself might have presided over with his wife, Caroline, a society beauty who spent much of her childhood in France. The same settings will sparkle by night on December 1, during Tudor Nights, our quarterly, adults-only members’ celebration. (Non-members may attend for $15, space permitting, or are invited to take the occasion to support Tudor Place by joining us.) And guests of all ages can enjoy a tour of one, two, three or four historic houses, all decked for the season, during the “Holidays Through History” open house, 4:00 to 8:00 p.m. on Saturday, December 3.