Tudor Place Curator Grant Quertermous tells the romantic story behind this 1925 portrait of Caroline Ogden-Jones Peter, which visitors see in the Dining Room at Tudor Place. Relying on primary sources, Quertermous provides rich details about the painter, his process in creating the portrait, and the American art community’s recognition of the painting.

October 11th was declared the International Day of the Girl by the United Nations in 2011. The day serves a dual purpose: highlighting the challenges girls in today’s world face and simultaneously promoting girls’ empowerment. In 2018, the day focuses on expanding learning opportunities by encouraging girls to think outside the box as they develop their skillsets. Tudor Place is filled with the stories of incredible women and, in particular, the stories of women who had to be creative and innovative throughout their lives. In telling these stories, we hope to inspire girls to discover their own stories while exploring those of the women who lived and worked here at Tudor Place.

The first woman on our list is Britannia Kennon. Born in 1815 as the youngest daughter of Thomas and Martha Peter, she married at age 27 in 1842. She had one daughter, Martha called Markie, before her husband was killed in a shipboard accident in 1844. She never remarried, choosing instead to live as sole mistress of Tudor Place until she passed away on the eve of her 96th birthday in 1911. During her 56-year period of ownership, she took in four of her sister’s orphaned children, rented out rooms during the Civil War to avoid governmental seizure of the house, sold land at the northern end of the property to support the family, and assisted in raising her grandchildren following her daughter’s early death in 1886. We at Tudor Place are particularly fond of Britannia because she provided us with a treasure trove of knowledge about the objects in her care—including our extensive collection of objects from Mount Vernon. These handwritten notes detail the ownership and use of these objects and are invaluable resources for our curator and collections team. Because of this, we consider Britannia to be the house’s first ‘curator.’

Agnes Peter, Britannia’s only granddaughter, is another intriguing woman who lived at Tudor Place. In 1918, Agnes enrolled in a specialized summer course designed to prepare women for war work that included classes in wireless telegraphy, electrical repair, Red Cross work, the French language, and automobile repair. Following the course, Agnes prepared to go overseas with the Red Cross for war work. Though her trip was cancelled when the Armistice was signed in November of 1918, she did go to work in France with the YMCA and operated shelters for soldiers and children throughout France. In 1921 she received two medals from the French government for her humanitarian work there. Agnes did not marry until age 73; she married Dr. John Mott, an 88-year-old widower. He passed away in 1955 and she in 1957; she is buried in Oak Hill Cemetery near her parents, several of her siblings, and her beloved grandmother.

Caroline Peter, wife of Tudor Place’s last private owner Armistead Peter 3rd, was born in Paris in 1894 while her American parents were living abroad. Also a Red Cross volunteer during both world wars, Caroline served at the U.S. Debarkation Hospital and Georgetown University Hospital. At her Georgetown station she was a captain of the Red Cross Nurse’s Aides and completed over 4,000 hours of service. Having taken nursing courses at Johns Hopkins prior to World War I, she continued to volunteer in the medical field at the Mount Alto Veterans Hospital following World War II. Caroline was an active member of numerous local organizations, including the Literary Society, the Junior League, the Alliance-Française, The National Society of The Colonial Dames of America, and the Georgetown Garden Club.

But Tudor Place’s story is not just limited to the members of the Peter family. Numerous people, both enslaved and free, worked here on the property and we have the opportunity and responsibility to tell their stories too. The Peter family did own enslaved people and they represent a significant component of Tudor Place’s history. For example, the Peters owned a cook named Patty Allen prior to 1831. Though only fragments of information can be found about Patty, we do know that an enslaved woman named Patty was included in Thomas Peter’s Day Book listing of enslaved people received in 1796—Patty is noted to be 25 at this time. Patty was actually married to a free man who lived here in Georgetown and our records tell us she went home each evening, which was unusual as most enslaved people lived on their owners’ estates. Because of this, we see Patty as someone who was able to negotiate with the Peters and advocate for herself in a way that differed from the norm.

Another enslaved woman at Tudor Place, Stacia, did live at Tudor Place and worked in the household; her duties included caring for the Peter family’s children and occasionally acting as a nurse. Stacia was given major responsibilities by the family, including nursing a nephew through a bout of typhoid fever (which she did successfully) and caring for the house and grounds while Britannia, then-owner, was travelling. Stacia was roughly the same age as Britannia and they maintained a lifelong relationship, keeping in touch following emancipation in the District of Columbia in 1862. Stacia continued to live in Georgetown and her last recorded contact with Britannia was in 1892, only 19 years before Britannia’s death.

Like Stacia, Hannah Pope straddles the line between enslaved and free. Born in 1828 to Barbara, daughter of one of the Custis dower slaves, Hannah was raised at Tudor Place and her primary duties were as a lady’s maid to Britannia. Britannia noted that Hannah had mixed racial ancestry and, though her father is unknown, her descendants believe that he was a member of the Peter family. Hannah was sold to a nearby Georgetown family, the Carters, in 1845 to marry one of the Carters’ enslaved workers—a man named Alfred Pope. Both Hannah and Alfred were manumitted, or freed, in Colonel Carter’s will and proceeded to become prominent members of Georgetown’s African-American community. Alfred, with support from Hannah, became a successful business man and, at the time of his death, owned a significant amount of land in Georgetown.

Following emancipation, the Peter family turned to the immigrant population in addition to the newly-freed African-American population as a source of paid labor. Margaret “Maggie” Carraher, who had immigrated to the United States from Ireland in 1868 at the age of 19, lived and worked at Tudor Place between 1880 and 1888, then again from 1904 and 1911. Armistead Peter 3rd, Tudor Place’s last private owner, remembers watching her make bread when he was a young boy, which she did “expertly.” Following her retirement in 1911, Maggie received cash gifts from the Peter family for several years. She passed away in December of 1932 and is buried nearby in Holy Rood Cemetery.

Each of these women demonstrate the resourcefulness, determination, ingenuity, and dedication that the International Day of the Girl hopes to inspire in new generations of girls. From negotiating to live offsite, as Patty Allen did, to utilizing nursing skills during the world wars, as Caroline Peter did, every one of these women were able to achieve remarkable things with the circumstances they were in. We can learn important things from all of these stories; determination from Britannia, adventurousness from Agnes, dedication from Caroline, ingenuity from Patty, capability from Stacia, resourcefulness from Hannah, and tenacity from Maggie. Perhaps we can even see a little of ourselves in these women and, in turn, learn something about ourselves from the girls of the past.

Find out about the close ties between Alexander Hamilton’s widow, Elizabeth Schuyler Hamilton, and Britannia Peter Kennon, a past owner of Tudor Place. Objects from that friendship remain in the collection at Tudor Place. 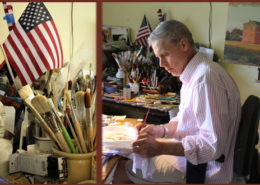 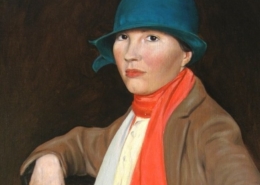