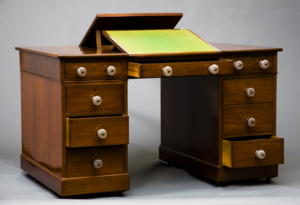 One of the standout pieces in the Tudor Place Collection is a partners’ desk that belonged to Francis Scott Key. Known primarily as the lyricist for the “Star-Spangled Banner,” Key was a prominent lawyer in Georgetown and served as District Attorney for Washington City from 1833 to 1841. The desk, which dates to the 1830s, likely saw Key through his district attorney years and witnessed one of the most violent instances of unrest in the city’s history.

In August 1835, an alleged threat by an enslaved Black man toward his female owner instigated days of rioting by whites that targeted Black businesses, churches and schools. Eventually called the “Snow Riot” after Black restaurateur Beverly Snow (whose business was destroyed by one of the mobs) it represented the culmination of years of racial and class tensions in the city and a central figure trying to resolve the effects of the chaos was Francis Scott Key. ¹

By 1835 the free Black population in Washington City had outgrown the city’s enslaved Black population. The city was becoming a destination for free Black entrepreneurs who desired access to African American-run institutions. This dynamic was one of many factors that combined to make the city rife with tension between whites and Blacks and ripe for the outbreak of violent riots that would erupt that summer.

It began on the evening of August 4 when 18-year-old Arthur Bowen left a debating society meeting led by prominent Black educator John F. Cook, Sr. His meetings were regular events where free and enslaved Blacks could gather and discuss slavery, temperance and other contemporary issues.

Slavery was certainly on Bowen’s mind because he was  owned by prominent Washingtonian Anna Maria Thornton, whose late husband, Dr. William Thornton, had designed Tudor Place and the first U.S. Capitol building. Bowen learned how to read and write and moved about the city with relative independence, but much to the disappointment of his mother, Maria Bowen, his attentions were directed mostly toward horse racing and drinking.  After the meeting, a very inebriated Bowen returned to the Thornton house on the north side of F Street between  13th and 14th Avenues. Rather than go straight to bed, he picked up an ax and approached the door of the bedroom shared by Anna Maria Thornton, her mother and Bowen’s own mother. He opened the door with the ax under his arm and shouted to the startled occupants, “I’ve got just as much right to freedom as you!” While his mother tried to restrain him, Anna managed to escape and alert neighbors, whose arrival drove Arthur off.

This incident played into the fears of many whites and slaveholders that free Blacks and abolitionists were loosening the chains of slavery in the city. To slaveholders, talk of emancipation only poisoned the minds of ‘docile slaves’ by giving them the impression that they could thrive outside the institution of slavery.

Four years earlier a rebellion of enslaved Virginians in Southampton County led by Nat Turner killed over 50 whites, validating (in the fearful eyes of white onlookers) the deadly risks of such ideas. The Bowen/Thornton incident was seen to further prove their fears correct. Bowen ended up in the city jail, but the fact that he had not harmed anyone was not enough to prevent a white lynch mob from descending on the jail. As District Attorney, Francis Scott Key deterred the mob by stationing a detachment of U.S. Marines at the jail. Their blood-lust thwarted, but still desiring to send a message to the city’s abolitionists and free Blacks, the mob took out its anger on Black owned businesses, homes and institutions, including Beverly Snow’s Epicurean Eating House on the corner of 6th and Pennsylvania Avenue. The destruction lasted for days and ended with the intervention of President Andrew Jackson.

The causes of the riot actually went much deeper than the Bowen/Thornton incident. While slaveholders feared the influence of abolitionists and free Blacks, it was white workers who did the actual rioting, and with different motivations than the slaveholders (though both freely used the city’s Black residents as scapegoats). White workers resented the city’s Black population because African Americans competed with them for jobs. White workers believed Black workers received more federal contracts because they accepted lower wages, perhaps not realizing that Black workers had little power to negotiate terms. Ironically, many white workers had equal disdain for the slave holding class, who they viewed as condescending and obstacles to the working class’s effort toward obtaining true political and economic power. In any case, white workers used rioting against the Black community as a way to vent these frustrations while risking minimal punishment. 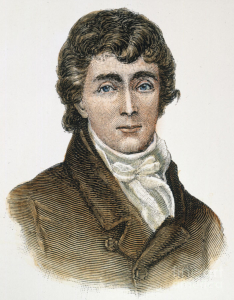 When order was finally restored, it was up to Key as District Attorney to ensure that justice would be served and prevent future unrest. He had recently moved from Georgetown to a home in Washington City on C Street near 3rd Avenue. From this base and his office in city hall, he formulated the prosecution of Arthur Bowen, members of the white mob, and an abolitionist named Reuben Crandall who had recently been arrested for possessing a trunk full of anti-slavery literature. Justice would be served, but it became clear that it would not be distributed equally. Despite the pleadings of Anna Maria Thornton that Bowen had meant no harm on the night of the incident, Key succeeded in getting a guilty conviction with the sentence of death by hanging. Not to be deterred, Thornton took her case to President Andrew Jackson, who eventually issued a presidential pardon that permitted Bowen to avoid the death penalty and be sold to a slaveholder in Florida. Shortly after the sale, Thornton and Bowen stopped corresponding and the eventual fate of Bowen is unknown.

Key also aggressively went after abolitionist Reuben Crandall. A white schoolteacher who had recently moved from New York City, Crandall swore that he had no intention of distributing the abolitionist pamphlets that were found in his home. But Key and other slaveholders viewed abolitionists as even more dangerous than free Blacks for inciting rebellion in enslaved communities. Key himself was an advocate for colonization, the idea that the United States could end slavery by sending emancipated people to Africa. But he certainly did not believe in racial equality and feared what would happen if enslaved people were simply freed to live and function in white American society. In the end, Key was not successful with this prosecution; abolitionists funded Crandall’s defense and he was acquitted.  The results of Key’s prosecution of the white rioters were mixed. He achieved 10 convictions, but all were released with fines and no jail time. Worse still is that none of the Black property owners were compensated for their losses. In fact, the city imposed new restrictions on free Blacks: to move to Washington City, a free black person had to post a $1000 bond approved by five white residents. The city also tried to restrict free Blacks to the trades of cart and carriage driving, but so many refused to follow the law that it was eventually struck down by the courts. 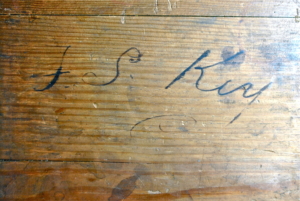 Key’s simple, sturdy partners’ desk manufactured by an unknown Washington, DC maker is one of the few remaining pieces of material culture that reflects his role during this critical time in the city’s history. Key’s initials appear on the top of the two pedestals, on which sits a broad top; they also appear on the bottom of several drawers. After Key’s death in 1843, the desk ended up with his friend and legal contemporary, James Dunlop Jr. It descended in that family before being sold to Armistead Peter Jr. in 1917, and has remained at Tudor Place ever since.

Peter desired the desk because of Key’s fame as the lyricist to the “Star-Spangled Banner,” but it also holds a much deeper meaning to Tudor Place today. Key’s role as District Attorney of a young and rapidly changing city, the Snow Riot and the successes and failures of Key’s justice are a poignant illustration of the city’s early and ongoing struggles with racism and inequality. Through it, we are offered an opportunity for reflection surrounding the efforts for equality that continue today.