Well, we are almost done!  A lovely slide show of pictures will be posted next week, but until then, here is a short video of the chandelier cleaning.

Collections Assistant Joni Joseph explains the process of cleaning the Federal Period chandelier that hangs in the dining room while Nina Owcsarek dusts the crystals. 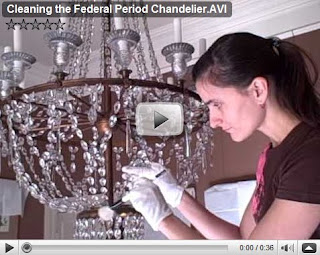 This chandelier is believed to be one of the few lighting fixtures to survive from the Federal period. Armistead Peter, III wrote that it originally hung in the Drawing Room, where Lafayette was entertained in 1824. A. Peter, III writes further, “It had been taken down, the crystals appeared to have been senselessly pulled apart, and had been packed in a box in this condition. The frame had been put with them in the attic….” This was probably prior to the Civil War when Britannia W. Kennon installed gasoliers. Many years later A. Peter, III restrung the chandelier. At that time he discovered that apparently not all the holes pierced in the metal frame for stringing had been used. Without a complete set of crystals, it was impossible to be certain of the original configuration. The tin wax-cups, “…are original, and were made because the candles dripped upon the shoulders of the people below. My great-grandmother told my father [A. Peter, Jr.] that they were made locally. The chain around the upper part is an improvisation of my own….”