By Curator of Collection Erin Kuykendall and
Communications Officer Mandy Katz
Imagine the excitement at Tudor Place last week when we accepted delivery of the exquisite plateau, or set of mirrored trays, that belonged to George and Martha Washington, according to Peter family tradition. Hand-crafted of exotic woods and mirrored glass and set on ball feet, the artifact had been away since May 2010, undergoing treatment at the Williamsburg, Virginia, studio of conservator Thomas Snyder. Today, visitors will find it center stage in the Dining Room for the duration of the Window on Washington  (through March 18), a close look at Tudor Place items relating to the first First Family.

The Tudor Place Dining Room is set to show how the plateau might have appeared
on a late-18th-century table. With its original seven sections, the mirrored set
could have added sparkle to a full banquet-length table at Mount Vernon.

Plateaus were a fixture of fashionable European dining tables in the late eighteenth century, so it seems fitting that the new American President — albeit living on a more modest scale than his counterparts across the Atlantic — would have acquired one, too. During his presidency, Washington asked his close friend, Gouverneur Morris, to send “mirrors for a table … the frames may be plated ware or anything else more fashionable.” What Morris sent was a nine-part, silver-plated French plateau with a pierced gallery of turned balusters. It repeatedly graced the presidential dining table until Washington retired to Mount Vernon in 1797. At that point, he sought something simpler and more suited to life on his Virginia estate.
The Tudor Place plateau is carved from mahogany and has delicate satinwood-inlay stringing around the lower edge. Small, ball-shaped ebony feet elevate the plateau above the table-top. Each section contains a silvered-glass mirror bordered by a carved, gilt molding. Of the plateau’s original seven pieces, four are owned by Tudor Place Foundation, and a fifth is on loan from a Peter family descendant. The Washingtons also owned a dozen figurines of unglazed “bisque” (or “biscuit,” meaning not-fired) porcelain like the ones below, which would have been arrayed atop the mirrored trays in fanciful arrangements:

Around these figures, the hosts would have displayed twinkling candles, gleaming silver candlesticks, and colorful flowers for a truly dramatic effect.

During the Window on Washington, four sections of the plateau, each measuring two feet, take their place on the Tudor Place dining table, bearing items from the French porcelain dinnerware service that the Washingtons purchased in 1790 from a French diplomat, the Comte de Moustier. The Washingtons’ delicate English wine glasses with wheel-engraved decoration (on loan from Martha Custis Peter, a descendant of Martha and Thomas Peter) also grace the table.

The plateau’s treatment by Conservator Thomas Snyder included a thorough cleaning to remove centuries of surface debris. Two new ebony feet were turned to match and replace missing ones and adhered with fish glue. Gaps and breaks in the plateau’s gouge-carved mahogany railing, or “gallery,” were filled with replica pieces crafted from mahogany and stained to match the original.
Mercury leaching from the original silver-amalgam glass had to be contained; broken mirrors were replaced with commercially obtained reproduction glass of tin leaf-and-mercury, sealed in place with hide glue. (Antique replacement glass was considered but rejected for the reasons that it might later be mistaken for an original installation or repair, and because it might also fail over time, much as the original pieces had.) Here is the renewed piece, its wood shined with a mixture of pigmented beeswax and carnauba waxes:

Microscopic examination by Dr. Martha Case of the Herbarium of the College of William & Mary (WILLI) identified the loose seeds and grasses cushioning the two ends of the plateau as containing a species of Asteracea, or commonly found field daisies and sunflowers. These plants grow all over the world. Since the seeds ripen during the summer months, it is likely this practical, botanical packing material was collected and assembled into the plateau sometime in June, July or August.

The original glue blocks in place on the plateau sections also provide further clues as to the plateau’s origins. Microscopic analysis of the wood identified the species as Pinus strobus, or Eastern white pine, and the use of this locally available wood suggests the plateau was probably made in America, rather than imported from England or Europe. George Washington purchased furniture from prominent Philadelphia cabinetmakers and it is possible this plateau was also made in a thriving urban port such as New York, Philadelphia, or perhaps Baltimore. If the plateau was made by an American frame-maker or carver working in the new American republic, it would be an exciting discovery, since very few wooden plateaus survive in American museums and collections. Further research on these questions is still underway. 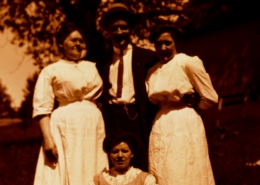