Archaeological surveys & excavations yield clues that help us better understand the history of the estate.

Tudor Place is unique among historic sites in Washington, DC, because most of its 5 ½ acres remain undisturbed by recent construction or development. As a result, the property has the potential to provide a rich material record of lost features and artifacts. Archaeological excavations are undertaken prior to any project that will disturb large areas and actual earth moving is monitored.

In 2010, a detailed Phase I survey of the 5 ½ acre site undertaken by Dovetail Cultural Resource Group, identified areas of occupation or significance warranting future investigation. That survey, and a 2009 report by archaeologists from the University of Maryland, have guided all later initiatives.

Excavations across the site have yielded insights into the development of Georgetown, and the Federal City; along with the lives and work of occupants, including those often absent from the written record, such as Native Americans, enslaved laborers and children.

Interested in learning more? Check out these articles about archaeological digs at Tudor Place. 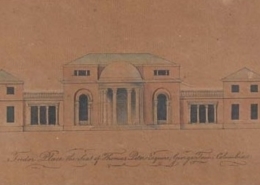